The final results of the local elections have been summarized 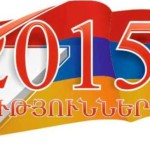 15.05.2020
Deputies of the newly elected National Assembly have been registered and received certificates
Today, on May 15 the Central Electoral Commission of the Republic of Artsakh ...