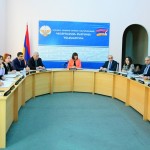 The results of the NKR Central and Territorial Electoral Commissions’ activities of 2015 were summed at the meeting. It was taken into note by the members of the Central Electoral Commission the report of the CEC Chairperson on the 2015 activities of the NKR electoral commissions, according to which, in the reporting period the electoral commissions organized and conducted the NKR National Assembly elections of the 6th convocation, as well as, local elections in 91% of the Republic’s communities (in 208 communities). The elections were observed by 109 international observers arrived in Artsakh from 28 countries, as well as, 111 local observers, mass media representatives. In general, 155 057 280 AMD were spent for the organization and conduct of the elections in 2015. A significant part among these amounts – 123 185 200 drams (79, 4 percent of the total expenditures) compiled the compensation payments made to the members of the electoral commissions involved in the electoral process.
The chairmen of the NKR Territorial Electoral Commissions had a speech at the meeting as well.
The second issue of the agenda concerned the approval of the plan on the main events of 2016 activities of the NKR Central Electoral Commission. The approved project involved issues on implementing the preparatory work on the regular elections to the local self-government bodies in 39 communities of the Republic in 2016, organization of professional training courses and seminars for the candidates to the commission membership, preparation of editing and printing documentary materials on the elections held in the NKR.

Taken into account, that, according to N12 decision of January 20, 2016 of the NKR Government, local elections will be held on April 17, 2016 in 13 communities of the Republic, the Central Electoral Commission discussed and approved the schedule of the main events (56 events) of the preparation and conduct of those elections and cost estimate (5 902 380 AMD), instructing the responsible performers to ensure proper organization of the elections in the prescribed terms and procedure. According to the aforementioned schedule, the deadline for submitting the necessary documents for the registration of the candidates to the community head and Council of Elders to the relevant territorial electoral commission has been established from March 13, 2016 to March 18, 2016 till 18.00, the registration of the candidates will be performed from March 18, 2016 to March 23, 2016 till 18.00. The pre-election campaign will start from March 24 and will last till April 16. 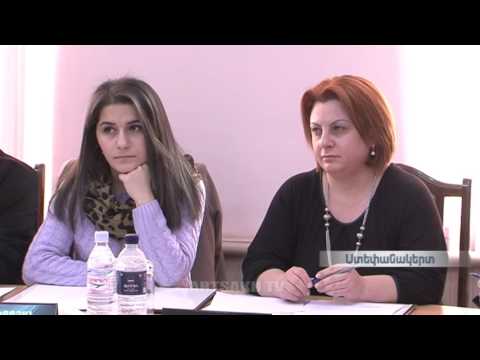