On October 3, 2013, NKR CEC Chairperson S. Arzumanyan held a meeting attended by members of the Central Electoral Commission and Chairpersons of Territorial Electoral Commissions.
The first item on the agenda related to the process of organization and forthcoming issues of the regular and early local elections, which will take place in 18 communities of the republic on October 13, 2013 (rapporteur – CEC Secretary R. Nazaryan).
Twenty-one candidates for community heads and thirty candidates for Council of Elders were self-nominated within the prescribed time period. Twelve of the self-nominated candidates for community heads are acting heads of communities. Two or more candidates have been nominated in six communities (Norashen, Hovtashen, Machkalashen, Vazgenashen, Goghtanik and Mirik), which means that the elections will be held in competitive conditions. According to the number of the polling stations, twenty electoral commissions have been formed, the members of which had received professional training and qualification. The primary task of the electoral commissions would be to organize and hold the upcoming local elections in accordance with the requirements of the NKR Electoral Code.
The results of professional trainings of both members and candidates to electoral commissions organized in September 2013 (rapporteur – CEC Deputy Chairman Y. Arzumanyan), as well as a second phase of such trainings scheduled for November (rapporteur – CEC Chairpersons S. Arzumanyan) were also a subject of the discussion.
By the decision of the CEC Chairperson, the schedule and zonal distribution list of the professional trainings have been approved in advance. As a result, in the previous month 783 citizens from 90 communities (207 of them for the first time) received professional training and qualification. Three hundred and twenty-two (41 per cent) of those who received qualification have higher education, one hundred and ninety-one (24 per cent) have secondary specialized and two hundred and seventy (35 per cent) have secondary education. No political activism has been observed; six hundred and forty-six participants (82.5 per cent) are non-partisan and only one hundred and thirty-seven (17.5 per cent) are affiliatied with four political parties.
Shortcomings and deficiencies observed during the organization and conduct of the previous professional trainings were specifically analyzed during the meeting with a view to exclude them in future.
The CEC Chairperson also touched upon the peculiarities and the format of the professional trainings to be organized in November of this year, as well as the priorities of the Territorial Electoral Commissions to that end.
Issues related to the drafting of the 2014 budget of the Central Electoral Commission were also discussed at the meeting.
Summing up the results of the enlarged meeting, CEC Chairperson S. Arzumanyan instructed CEC officials and chairpersons of Territorial Electoral Commissions to carry out, in cooperation with competent and interested bodies, necessary organizational work to properly organize and conduct the local elections of October 13, 2013, as well as the professional trainings scheduled for November. 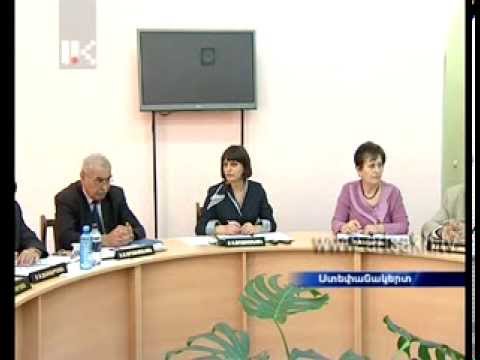 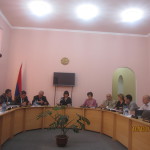 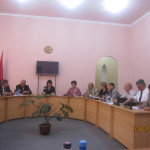 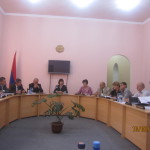