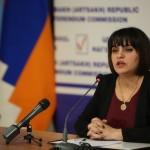 On February 19, the Chairwoman of NKR Referendum Central Commission Srbuhi Arzumanyan hold a press conference with the participation of international observers and media representatives.

The majority of Talish people are located in the Alashan village of Martakert region where their voting process will be conducted. Also, in the NKR Permanent Representation in Yerevan will also provide the population from Talish in the Republic of Armenia with the opportunity to take part in the conference».
Answering to the question about deficiencies and complains of the previous elections and their correction in the current election, S. Arzumanyan stated that the only complain of the previous elections was the demand in one of the election districts to recalculate the votes. After the recalculation in the presence of the authorized persons, the results of the voting did not change.
The complete statement by the Chairwoman S. Arzumanyan is attached.