The CEC’s first session of this year was held 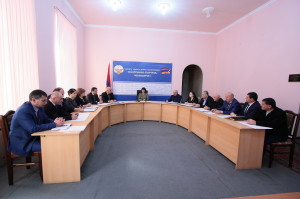 On February 18, 2019 the first session of the Artsakh Republic Central Electoral Commission of  2019 was convoked under the leadership of the commission Chairperson S. Arzumanyan. CEC members, chairmen of the territorial electoral commissions, CEC responsible officers and mass media representatives attended the session.

The action plan of the main events of the AR Central Electoral Commission of 2019 has been approved at the session. It includes issues on the adoption of the legal acts deriving from the AR Constitution (AR Electoral Code and AR Law “On Referendum” till October 1, 2019, CEC normative legal acts deriving from it) as well as, the organization of the local elections scheduled in autumn of 2019, also the conduction of two-stage professional trainings.

The Central Electoral Commission has also adopted a number of departmental legal acts, the adoption of which is conditioned by the necessity to ensure the implementation of Articles 122 and 162 of the Artsakh Republic’s Constitution adopted on February 20, 2017.The legal regulations arising from these articles should be regulated by the AR Law “On Referendum”, which has already been drafted and will be put into circulation, as well as by the decisions of the Central Electoral Commission of the Artsakh Republic.

It refers to the adoption or amendment of the Constitution by the procedure of the civil initiative or proposing the draft law to the National Assembly or the organization of collecting signatures for putting the draft law to the Referendum on making amendments in the Law adopted by the Referendum, the possibility of coordinating the activities of which is given to the initiative group.

the procedure of the formation of the initiative  group, its activities, as well as, the termination of that activity,

the procedure of collecting signatures in place, the requirements submitted to the required form for that,

the rules of the approval of the validity of the signatures

Thus, it was established that the collection of the signatures in place should be organized in the municipalities and regional administrations operating in the district of the Artsakh Republic (in the Municipality of Stepanakert) by the representative of the initiative group  implementing the collection of the signatures and by the relevant public officer appointed in the place of collecting the signatures. Only the citizens who have the right to participate in the referendum at the moment can sign up and the citizens who reached the age of 16 may be engaged in collecting the signatures (initiate, organize, assist).

At the same time it is possible to join the collection of the signature in the form of a statement of a special form defined by the CEC decision issued by a notary.

The collection of the signatures may be implemented by at least 10 citizens and after the registration of the initiative group registered in the CEC within 45 days, then they should be submitted to the CEC no later than in 15 days, the validity of which should be checked by the Central Electoral Commission within a one-month period. As a result, the CEC takes one of the two decisions; after receiving it the authorized representative of the civil initiative  based on the decision on the approval of the validity of the signatures, has the right  to submit it together with the relevant draft to the National Assembly within 15 days in the procedure prescribed by Law. In case the CEC rejects the approval of the validity of the signatures, the decision on it may be appealed in court.

P.S.___The above-mentioned normative decisions of the CEC will be sent to the Ministry of Justice of the Artsakh Republic  for state registration. It should be reminded that the normative decisions of the CEC come into force after the state legal expertise of the normative legal acts and the state registration, within the timeframe established by law (Articles 32 and 45 of the NKR Law “On Legal Acts”). 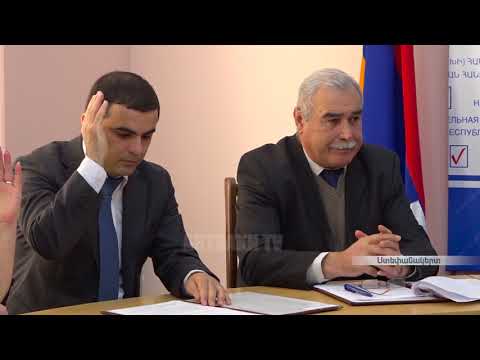 OF THE ARTSAKH REPUBLIC