On the CEC session 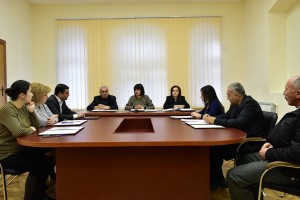 On February 12, 2020, the regular session of the Central Electoral Commission of the Artsakh Republic was held, chaired by the chairperson of the commission Srbuhi Arzumanyan. The meeting was attended by CEC members, CEC responsible officials and media representatives.

Based on Part 2 of Article 29 of the Electoral Code of the Republic of Artsakh, at the aim of performing oversight of the contributions made to campaign funds, expenditures and their calculation, as well as of the daily financial activities of the political parties, by the decision of the Artsakh Republic Central Electoral Commission Oversight and Audit Service has been established the head of which has been  appointed Garnik Avanesyan for a five-year term.

The cost estimate of the AR electoral commissions (Central Electoral Commission, 8 territorial and 282 precinct electoral commissions)   in the amount of 99 642 350 ( ninety-nine millions six hundreds and forty-two thousands and three hundreds and fifty) AMD related to the preparation and conduct of the regular elections to the AR President and National Assembly scheduled for March 31, 2020 was discussed and approved at the session . A significant part of the expenditures compiles the amounts of the compensation and salaries   given to over 2500 commissioners and other employees involved in the organization and conduct of the elections; over  75 745 200 AMD or 76.0% of the total expenditures.

The schedule of the events and other relevant legal acts and documents deriving from it will be given to the concerned departments and responsible performers.