Meeting with the observers 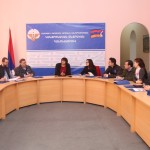 On February 19 NKR Central Referendum Commission Chairperson Srbuhi Arzumanyan had a meeting with the representatives from Great Britain, Belgium, Romania, Slovakia, Spain, Latvia and Slovenia who were in the NKR with an observation mission. Head of the ARF “Hay Dat” European Committee Office, Gaspar Karampetian was also in Artsakh with the group.

More than two dozen issues relating to the NKR Electoral Code, forthcoming constitutional referendum, as well as, issues of interest for observers were discussed during the meeting. They mainly referred to the public awareness of the constitutional reforms, collecting commissions, electoral legislation, implementation of professional education programs by the NKR CRC and the like.

Greeting the guests, NKR CRC Chairperson expressed hope that the regular electoral event in the form of referendum, which coincides with the Artsakh Revival Day,will let  reaffirm the positive position of the observers from the previous electoral experience. S. Arzumanyan said, this is the third referendum for only 26-year-old country.

During that time, also 5 presidential, 6 parliamentary elections were held in the Republic.”From elections to elections we try to ensure a higher level” said S. Arzumanyan.”  “To this end, especially legislative changes are being made in which opinions and recommendations of the observers visiting Artsakh are being taken into account. You will have the opportunity to visit referendum precincts and express your objective opininon on the Referendum. Be sure, that they will be taken into account during the forthcoming changes. The recent changes that were made in preparation for 2015 parliamentary  elections, have enabled us to conduct more quality elections. Our voters’ opinions, as well as, the recorded gaps, allow us to make such changes and constantly keep the hand on the pulse”.

S. Arzumanyan touched upon the preparation work of the Referendum, details of the campaign, the formed referendum precincts and commissions. She noted that the campaign was held in the framework of courtesy.

In his turn, Gaspar Karampetyan assured, that his partners will fulfill their obligations and European mission with all punctuality, which once again will promote to make the Artsakh electoral regulation more contemporary.

15.05.2020
Deputies of the newly elected National Assembly have been registered and received certificates
Today, on May 15 the Central Electoral Commission of the Republic of Artsakh ...