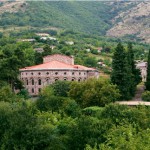 Preparatory work are being carried out for the organization and conduct of the upcoming July 20, 2014 local referendums of Chartar and Ghuze Chartar communities of Martuni’s region by NKR Central Electoral Commission.The provided ordinary measure was the meeting with the members of the precinct commissions for the referendum of these communities which took place on July 14 of the current year. The goal was to discuss the features of the conduct of the local referendum with the officials once again, especially the similarities and differences of the elections and referendums during the organization of the voting process, the procedure of filling the documents.

Chairperson of the Central Electoral Commission S. Arzumanyan submitted to the commissionaires their authorizations drawing attention to the local referendum to be conducted on the basis of genaral, equal and direct electoral right, aiming at the organization of the referendums in a high level. She was also interested at the opinions of the commissionaires referring to the issues of the organization of the upcoming measure. Chairperson of the NKR Central Electoral Commission S. Arzumanyan, Deputy Y. Arzumanyan, Secretary of the commission R. Nazaryan and Chairman of the Territorial Electoral Commission of Martuni H. Petrosyan participated in the meeting. It was explained that according to 35 article of the NKR law the question of the referendum (Are you for the communities Chartar and Ghuze Chartar of NKR Martunis region to be united in one Chartar community?) will be accepted if more than half of the participants but no less than one third of the citizens included in the voting lists vote < for >. Moreover the results of the referendum are summarized separately at each community. Recall that the number of the voters in Chartar community is 1742, and in Ghuze Chartar community 1313. The procedure of filling the protocols of the local referendum was also explained. The terms of summarizing the results of the referendum and submitting them to the Territorial Electoral Commission, as well as the functions of the prior day and the day of the voting were submitted. The commissionaires were handed in a package of documents referring to the conduct of the local referndum. Their questions were answered.

20.02.2020
Handbook for observers
The Artsakh Republic  Central Electoral Commission has compiled a handbook for the observers ...

20.02.2020
A handbook for proxies
In compliance with the requirements of Article 51 of the Electoral Code of ...

18.02.2020
On the candidates to the deputies
As we have stated in advance, we publish  the electoral lists of the  ...
All NEWS