Interview with Chairperson of the AR CEC Srbuhi Arzumanyan 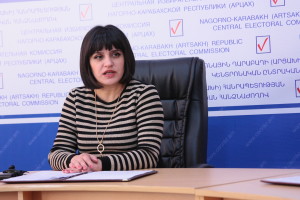 Mrs. Arzumanyan, the Central Electoral Commissionof the Artsakh Republic has lately adopted a number of decisions which directly define procedures for putting bills into circulation by the procedure of the civil initiative presribed by the AR Constitution.What kind of decisions are those and how relevant was their adoption in this period?

I should start with the second part of the question. On February 18, 2019 the CEC adopted departmental normative legal acts, which was conditioned by the necessity to ensure the implementation of Articles 122 and 162 of the Artsakh Republic Constitution. The legal regulations arising from these articles should have been regulated in the ideal version, first by the Artsakh Republic Law “On Referendum” and then by the Artsakh Republic CEC decisions. The Artsakh Republic Law “On Referendum” has already been  designed in the new edition and put into circulation. But taking into account, that it takes a long time to adopt the bill, as well as the fact, that there has been a public announcement in circulation about the intention to circulate a bill by the procedure of the civic initiative, so all this had  a necessity of temporary legal regulations in the form of CEC decisions. Otherwise, we will deal with the lack of proper conditions for citizens’ rights. The mentioned CEC decisions have received a state registration on 20.02.2019 and will enter into force on March 2 of the current year.

As for their content, which, by the way, has been worked out in line with the Armenian legislation, it can be summarized as follows.

In order to propose a bill or to put into a referendum, an initiative group of at least 10 citizens should be formed, which, among several documents prescribed in the manner, should submit the relevant bill to the CEC in order to post on the CEC website and inform the public, which should be followed by the implementation of the signature collection.

The collection of the signatures should be implemented by means of a special form of collecting the signatures by way of signing in place. By the way, only the citizens who have the right to participate in the referendum at the moment have the right to sign. The collection of the signatures should be organized in the municipalities and regional administrations (in the Municipality of Stepanakert). And not only;  it is possible to join it in the form of the notary issued statement the form of which is defined by the CEC decision.

What is the role of municipalities and regional administrations in the signature collection process?

First of all, it aims to provide technical conditions for citizens’ service. As our citizens are involved in this process, local authorities are committed to creating certain conditions for their civil rights. The observations that they are aimed to be controlled, let’s say, “take the process to the desired course”, are from the field of cheap speculations and have no connection with the reality. This process is supported by the representatives of the local government, the public servants, who, by the way, are also citizens of this country and conscientious servants, therefore, to consider suspicious the legitimacy of their activities, without any justification, is at least immorality.

You mentioned about the terms. Are they realistic, for example, a 45-day deadline for collecting signatures?

45 days are provided for collecting signatures, and another 15 days to summarize them and submit them to the CEC. The CEC examines the materials submitted within one month.

The reality is obvious, if the following facts are taken into account: Let’s say in the example of Stepanakert, the largest community; the number of voters in Stepanakert is 38,647 as of 01.01.2019. In this case, signatures of at least 3,865 voters’ will be required to proceed the project, which means that 86-90 citizens can be served daily, which can be provided to serve at least at one point. And service points can also  be more than one.

After the adoption of the law on referendum, shall revisions be possible in the existing categories?

Not only possible, but also obligatory, at least for direct reference to the legal act. And if improvements are expected by the law, then the changes in the CEC decisions are inevitable.

For now, the mentioned CEC decisions are the only legal basis to be guided while circulating the bills by civil initiative.

Press Service of the Artsakh Republic

15.05.2020
Deputies of the newly elected National Assembly have been registered and received certificates
Today, on May 15 the Central Electoral Commission of the Republic of Artsakh ...
All NEWS